What is comparative negligence in Washington slip and fall cases?

Though it may be jarring to hear “Cleanup on Aisle 7!” while grocery shopping, take comfort in knowing that store management is fulfilling its duty to take care of its premises so that no one slips on their floors and hurts themselves.

While most slips and falls just result in a sore bum, some cases involve sprained ankles, broken hips, skull fractures, and contusions that lead to brain aneurysms. Beyond bodily injuries that incur medical costs and missed days at work, falling can also mean damage to expensive items you were wearing (e.g., a watch) or something that you were handling (e.g., a flat-screen TV) at the time.

Because of these risks, property owners are legally obligated to take reasonable and proper care of their floors, ramps, and stairs. Reasonable care consists of practices such as the prompt cordoning off of areas with spillages, while an example of proper care is the use of non-slippery floor wax (as opposed to a slippery one) on walking surfaces. Those who fail to do these things may be obligated to fulfill insurance claims or held liable in personal injury lawsuits.

In Washington and in many other states, property owners are not the only ones who are required to exercise reasonable and proper care — their visitors share in this burden as well. When defending themselves against slip and fall claims, property owners can argue that:

Here’s where comparative negligence comes in

A judge, jury, or insurance company must look at the evidence and decide how much of the accident was the property owner’s fault and how much of it was yours. These are stated as percentages — e.g., the plaintiff or injured party could be 20% at fault and the defendant 80% at fault. These figures are then applied to settlement or verdict amounts. For instance, if the defendant settles for $100,000 or if the court awards the plaintiff that amount, the plaintiff will get 80% of $100,000, which is $80,000.

That’s the general idea behind comparative negligence, but there’s a couple of other things you need to know about it:

First the defendant must be found negligent in the slip and fall case. Otherwise, the case would be closed, and there would be no need to determine the injured party’s comparative negligence. 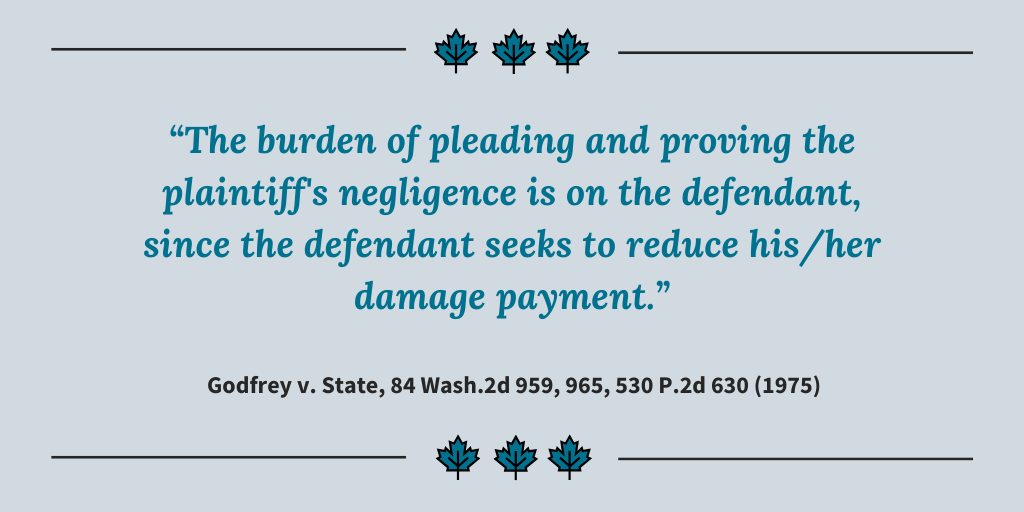 In Washington, there are no thresholds for comparative negligence that would disqualify plaintiffs from being awarded damages

However, in Washington, no such thresholds exist. This means that a jury may find a plaintiff’s comparative negligence at 99% This means that the plaintiff will still receive 1% of either the agreed settlement amount or award granted by the courts,

Whether you’re the plaintiff or defendant in a slip and fall case, it pays to have legal experts in your corner. For the best outcome in and out of court, turn to Buckingham, LaGrandeur, & Williams today.