Can e-cigarettes be considered as unsafe or defective under Washington law?

When we purchase goods, we expect these to work as advertised and not cause harm (unless these are intended to be harmful, such as explosives and poisons). In Washington, consumers are protected by the Washington Products Liability Act (WPLA), a law that compels manufacturers and merchants to only sell reasonably safe products that are apt for their intended and unintended-but-reasonably-foreseeable uses. According to that law, those who profit from the sale of products are liable for damages caused to direct users, reasonably foreseeable users, and those who would reasonably be likely to come into contact with those products.

A product can be said to be not reasonably safe for use if it has manufacturing defects, has a defective design, or does not have sufficient instructions for proper use or adequate warnings about the dangers of using that product. With these criteria in mind, let’s take a look at e-cigarettes.

First, let’s state its intended use: e-cigarettes — also popularly known as e-cigs, vapor products, vape pens, or just vapes — are marketed as alternatives to cigarettes and as smoking cessation aids. However, because manufacturers offer flavors such as vanilla and chocolate chip cookie, it is reasonable to claim that vapes also have recreational purposes.

E-cigs use rechargeable batteries to heat up liquid (commonly known as vape juice) and vaporize it, and the resulting aerosol or vapor can be inhaled by the user. While most users find smoking e-cigs to be mechanically straightforward, others are unfortunate enough to suffer vape pen explosions. These can be caused by the product malfunctioning, inferior product design, defective and/or overheating batteries, use of subpar parts, and use of the wrong charging device. 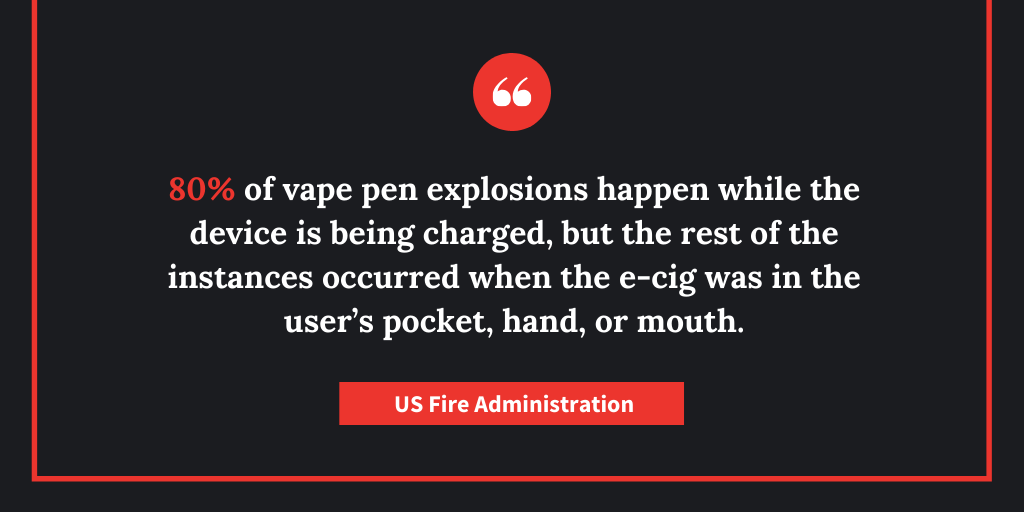 The US Fire Administration found that approximately 80% of vape pen explosions happen while the device is being charged, but the rest of the instances occurred when the e-cig was in the user’s pocket, hand, or mouth. Common injuries caused by vape explosions include severe burns, cuts or lacerations, and permanent disfigurement. There’s a case where a man died because the explosion scorched 80% of his skin and vape pen shrapnels went through his skull.

To hold manufacturers and merchants accountable for exploding vape pens, plaintiffs must prove that their vape had a substandard design, was poorly built, or had inferior components.

Since e-cigs are considered as nicotine delivery products, the FDA requires that ads for vapes include the following statement:

Beyond causing addiction, nicotine can lead to vomiting and nausea as well as brain development impairments in adolescents.

However, the potential harm that vaping can cause is not limited to nicotine use. A recent slew of severe lung disease cases in states that include Washington have been attributed to particular vaping practices such as using Tetrahydrocannabinol (THC) thickened with vitamin E acetate. Those cases have so far revealed that:

The Centers for Disease Control and Prevention (CDC) is still conducting research on the damaging effects of vaping, though Washington State has already passed the Tobacco and Vapor 21 Law (Engrossed House Bill 1074), a law that makes it illegal to sell vapor products to anyone under the age of 21. Vaping, which was once thought of as generally safe, is steadily being seen as unsafe in the eyes of state and federal laws.

If you or a loved one is suffering from EVALI and want to hold vape manufacturers and sellers accountable, turn to Buckingham, LaGrandeur, & Williams. Let our top-notch team of Personal Injury experts take a look into your case today.